Recently, the United States Department of Agriculture instituted the recall of 1,240,000 pounds of Italian sausage manufactured by Rhode Island-based meat packing company, Daniele International, after discovering that a sample of their black pepper salami contained salmonella.
On Wednesday, the Centers for Disease Control announced that, between July 2009 and the present, approximately 225 people in 44 states have been infected with a particular strain of salmonella, Salmonella Montevideo. Thirteen Massachusetts consumers have been infected with Salmonella Montevideo during that time. Some people believe that at least some of the Salmonella Montevideo episodes can be linked to Daniele International’s black pepper sausage.
Here is a CDC map of the outbreak: 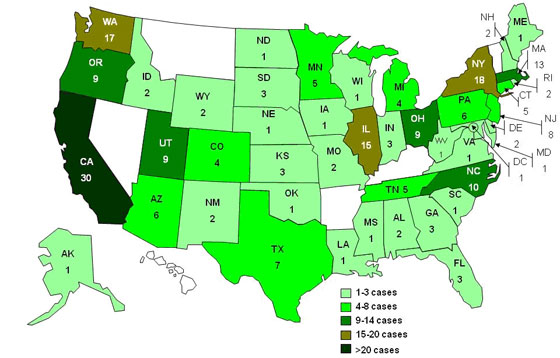 Today, the Associated Press reports that a Chicago man, who suffered salmonella poisoning, has filed a lawsuit against Daniele International and two of Daniele’s pepper suppliers, saying that they failed to take steps to prevent the outbreak.
Salmonellosis, the type of food poisoning caused by consuming salmonella-tainted food, typically produces symptoms such as fever, nausea and cramping. However, in children, the elderly and those with weakened immune systems, salmonellosis can be fatal.
We will keep you updated on this recall and further lawsuits against Daniele International.

If you have been injured as a result of food poisoning caused by tainted food and require the services of a Boston personal injury attorney, call The Law Office of Alan H. Crede at (617)973-6434 for a free consultation.