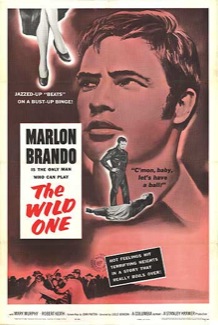 Each year more than a quarter million bikers descend on the Laconia/Weirs Beach area for the biggest motorcycle rally in the northeast. And each year, the event is preceded by dire media predictions of motorcycle accidents, property damage, and out-of-control revelry.
Yet each year, the bikers pour millions of dollars into the local economy, ride their motorcycles responsibly and leave town without much commotion or disturbance.
In short, the media myth about Laconia’s Bike Week always departs from the less-sensationalistic reality. Exactly why the media chose to portray bikers as wild hellraisers is unclear.
Hunter Thompson attempted to tackle the subject in his excellent work Hell’s Angels: A Strange and Terrible Saga, but even the good doctor ultimately was at a loss to explain why the news media demonizes bikers.
The news media’s demonization of bikers dates back at least sixty years. In 1947, a larger-than-expected group of bikers showed up in Hollister, California for an annual rally. Life magazine ran staged photos of bikers surrounded by empty beer bottles and its story created the impression that the town was under siege by bikers in the so-called “Hollister riot.”
This false portrayal was later elevated to iconic status by Marlon Brando’s bravura performance in The Wild One, which depicted the sensationalized version of the Hollister rally and which popularized the greatest motorcycle jacket of all time – the Schott Perfecto – as an American fashion statement. (James Dean would later also wear the Perfecto).
I see analogies between the public perception that bikers (in large groups) are rabble rousers and the popular perception that motorcycles are inherently dangerous. The fact of the matter is that every year there are very few accidents at Laconia when you factor in the extraordinarily large number of bikers who congregate there (more than a quarter million).
Part of the reason that Laconia is such a safe event is that part of town is closed to any traffic except for motorcycles. One of the biggest causes of motorcycle accidents is auto drivers who don’t “Look twice” before changing lanes. These riders are constantly looking out for one another to make sure no one gets hurt.
So let’s hope for an even safer than usual Laconia Bike Week this year, let’s hope it’s a bigger-than-expected boon to the local economy, and do our part to look twice on the roadways.