A couple of weeks ago, I blogged about a New York Times story reporting on an unexplained doubling of dog bites over the past fifteen years. The doubling was mysterious because dog ownership and the total number of dogs had increased only incrementally over the same period.
Now comes a New York Post story exploring the record number of dog bites that the Big Apple saw last year. According to the Post, toy breeds, such as chihuahuas and Shi Tzus, were the “major culprits” behind the dog bite uptick. One veterinarian says that since toy breeds are often toted around in purses to places that other dogs don’t go – such as department stores – strangers are having more contact with dogs and getting bit more often.
I’m not sure whether Gotham’s problems with toy breeds explain the national doubling in dog bites. I think the Chihuahua-in-a-purse phenomenon tends to crop up more in urban areas. And as someone who spends a lot of time with a teacup chihuahua, I don’t think that a typical bite from a toy dog is going to rack up nearly twenty thousand in medical bills – the average cost of medical treatment for a dog bite.

END_OF_DOCUMENT_TOKEN_TO_BE_REPLACED

As reported by The New York Times, a new Department of Health and Human Services report reveals that the number of dog bites requiring hospitalization nearly doubled over a fifteen year period, increasing from 5,100 dog bite victims in 1993 to 9,500 in 2008.
Experts are baffled by the dramatic spike. The increase can’t be explained by population growth because the increase in serious dog bites vastly outstripped population growth. Nor can the increase in dog bites be explained by an increase in dog ownership since dog ownership increased only slightly during the relevant period.
With emergency room visits for dog bites costing an average of $18,200, it is not surprising that dog bites account for one-quarter of homeowner’s insurance claims.

END_OF_DOCUMENT_TOKEN_TO_BE_REPLACED 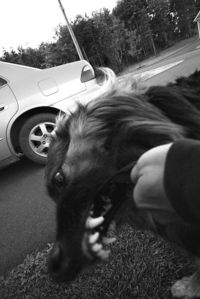 This week is National Dog Bite Prevention Week. Why should you care? Each year, about 4.5 million people are bitten by dogs, one in five of those dog bite victims requires hospitalization and approximately 30,000 a year require some sort of reconstructive surgery.
Children between the ages of five and nine are among the most likely to get bitten.

If attacked by a dog, experts advise you to remain calm and still and to “play dead” if you’re knocked down.
Dogs truly are man’s best friend. However, I think that old adage should be reworked a bit. Dogs are their owner’s best friend. And that necessarily means they can be a stranger’s worst enemy.