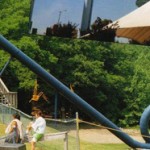 It earned the nickname of “Accident Park” from physicians at the local ER who treated untold numbers of park patrons who wound up injured.

What were the dangers of Accident Park? To my mind, the piece de resistance was the loop-the-loop waterslide partially pictured at left. This waterslide actually turned the riders upside down without them being belted or strapped into any sort of carriage. According to Wikipedia, when the park’s owners sent crash test dummies down the slide, some of the dummies wound up dismembered and decapitated. Eventually, the park’s owners decided to have park employees test out the ride and offered $100 to any park employee who would venture on the slide. According to the brave employee who stepped forward for the sake of “safety” at Action Park, “$100 did not buy enough booze to drown out that memory.”

Other problems at Action Park? Like many parks, Action Park had an alpine slide. But Action Park’s sleds were poorly maintained meaning, in practice, riders could only use the stick which controlled speed to choose between “extremely slow” and a speed one park employee descried as “death awaits.”

For skaters, Action Park boasted a poorly-constructed skate park where the edges of pavement often did not meet smoothly. As one park employee recalled, the “skate park was responsible for so many injuries we covered it up with dirt and pretended it never existed.

Popular ride “The Kayak Experience” simulated white water rafting with powerful fans submerged beneath the water to agitate the water. The hazards of this ride are obvious even without the benefit of hindsight.

Like many amusement parks, Action Park had go-carts. But its go-carts traveled in excess of 50 mph, leading to some pretty horrific injuries.

As the Wikipedia page notes, “Little action was taken by state regulators despite a history of repeat violations.”

It was trial lawyers who forced the park to shutter its doors and reopen many attractions under the newer, safer management of Mountain Creek.

For more on the unbelievable story of Accident Park, check out the Wikipedia page yourself.