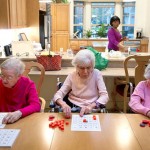 Today’s New York Times featured an article on a new, and quickly spreading, effort to deinstitutionalize nursing homes by changing their physical structure. Instead of occupying a vast hospital-like building, these new nursing homes are made up of clusters of arts-and-crafts style houses called “Green Houses.”

Each Green House is home to approximately ten residents. The floor plans are open and lead to interaction between staff and residents. For instance, food for the residents is prepared in a warm open kitchen, instead of some industrial-grade cafeteria, and residents will often make small talk with the cooks as they prepare their food.

There are currently 117 Green House nursing homes in the United States, with plans for more.

(A side note: thanks to a talented client who recently introduced me to the wonders of Greene & Greene‘s arts-and-craft furniture and architecture, I thought the “Green House” movement’s arts-and-crafts houses might have taken their inspiration from Greene & Greene, but, alas, it appears they are so named because the “Green Houses” originated with the Green Hill nursing home corporation).

END_OF_DOCUMENT_TOKEN_TO_BE_REPLACED

Last week, the MacArthur foundation announced this year’s winners of their $500,000 grants (commonly known as their “genius grants”). One of the recipients, Marie-Therese Connolly, is a lawyer who has devoted her life to combating elder abuse and neglect.
A graduate of Northeastern University School of Law right here in Boston, Connolly was working in the Department of Justice in the late 1990s when a Government Accountability Office (GAO) investigation uncovered abuses of patients at many nursing homes nationwide. In response, President Clinton directed the DOJ to create what became known as the Elder Justice and Nursing Home Initiative and Connolly was put in charge.
In an interview with NPR’s Morning Edition, Connolly said she hopes the award will bring greater attention to the plight of the abused elderly. Connolly stated that 1 in 10 Americans over the age of 60 is the victim of abuse or neglect. Among elderly with dementia, the rate of abuse is even higher. A staggering forty-seven percent of elderly with dementia suffer abuse. And only about one in twenty-five incidents of elder abuse is reported or investigated.
Congratulations to Connolly on this great honor. Advocates against elder abuse and neglect have made a lot of progress in the past decade but much remains to be done.

END_OF_DOCUMENT_TOKEN_TO_BE_REPLACED

I’ve blogged previously about how misleading some of the blog posts on tort reform websites are – how their synopses of cases get it all wrong. This is doubly true when you see a link roundup of cases on one of these websites – one sentence summaries of cases followed by links.
The latest instance of this sort of dishonesty that I’ve come across was in a Point Of Law roundup post of May 17. The post contains the following precis of a case: “$28 million in punitive damages for bedsore in Sacramento.” Really, Point of Law? You’re better than that. Or at least you should be.
Having read The Pop Tort‘s coverage of the nursing home verdict a few days earlier and followed Point of Law‘s post through to its links, it’s obvious that this $28 million dollar punitive award was not for the bedsore: it was for a wrongful death. So far as the news reports tell it, the case concerned a seventy-nine year old woman who fell and fractured her hip in a nursing home operated by a company that had previously been cited for understaffing and patient neglect. The woman then developed an untreated bedsore that became infected and resulted in her death.
Hmmm….so is it $28 million for a bedsore or $28 million for a corporation’s killing an elderly woman through its “malicious, fraudulent and oppressive” business practices?

The Globe and Herald report today on another alleged incident of nursing home abuse, this one involving the Elizabeth Seton Residence in Wellesley Hills.
The main allegations are that a male certified nursing assistant used his position to commit indecent assault and batteries upon vulnerable female patients.

END_OF_DOCUMENT_TOKEN_TO_BE_REPLACED

The abuse and neglect detailed by the Herald story is shocking. Nursing home residents not receiving CPR when unresponsive. Nursing home residents who are the victims of physical, sexual and verbal abuse by staff. Nursing home residents slipping and falling in puddles of their own urine. Untreated bed sores, pneumonia and urinary tract infections.
If you have a family member in a nursing home, there are some great resources out there to help you investigate the quality of care at the nursing home where your family member is cared for. The Herald story mentions the mass.gov wesbite, but you can also use the Department of Health and Human Services’ OSCAR database. Or contact the Massachusetts Advocates For Nursing Home Reform.

END_OF_DOCUMENT_TOKEN_TO_BE_REPLACED

USA Today ran a great article yesterday on nursing home quality. Their investigation found, somewhat surprisingly, that nonprofit nursing homes provide better care than for-profit homes.
So, nursing home care seems to be one of those few areas in life where you don’t necessarily get what you pay for.
Upon reflection, the results aren’t so surprising. Caring for the elderly is a calling. People who are motivated primarily by money are unlikely to have that calling and therefore are likely to provide lesser care.