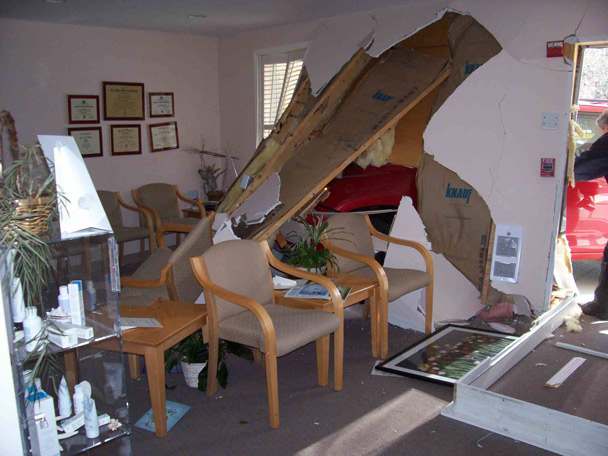 The Boston Globe reports today that experts from the National Highway Traffic Safety Administration will soon descend upon Cape Code to investigate a car accident where a Harwich woman’s 2010 RAV4 drove through the wall of a doctor’s office in Yarmouth.
The woman reported that her car accelerated after she depressed the brake. The woman said that, after driving through the wall, she looked down and her foot was on the brake.
The 2010 RAV-4 is one of the models recalled by Toyota in January.
It will be interesting to see what the NHTSA investigators determine.

END_OF_DOCUMENT_TOKEN_TO_BE_REPLACED

There are two Massachusetts personal injury cases to report on this week. One case, Soderberg v. Concorde Greene Condominium Association, modifies Massachusetts law in slip-and-fall cases, making the law less hostile to plaintiffs. The other case, Lev v. Beverly Enterprises-Massachusetts, Inc., has yet to be decided by the Massachusetts Supreme Judicial Court, but may allow corporations to be held liable for injuries to third-parties resulting from alcohol served at company parties.
In Soderberg, the plaintiff, an elderly woman, fell and broke her hip when she slipped on some ice on her way to her condo complex’s parking lot. Very often, such slip-and-fall cases are barred by the Massachusetts “natural accumulation,” rule that says that snow and ice that property owners should not be held liable for snow and ice that has accumulated naturally, only for snow and ice that they have altered in some way (this rule is currently under review in a separate pending appeal).
However, in Soderberg, the natural accumulation rule did not apply because the accumulation of snow and ice in the parking lot was not “natural.”
The trial judge instructed the jury that, if they found the natural accumulation rule did not bar the plaintiff’s recovery, they should go on to consider a separate question: whether the snow and ice was an “open and obvious danger,” that is to say, a condition that was so obviously dangerous that any passerby should have taken pains to avoid it.
On the basis of those instructions from the judge, the jury found against the elderly woman. However, the Massachusetts Appeals Court overturned this verdict, saying that it was error for the jury to consider whether the snow and ice constituted an open and obvious danger. The Appeals Court essentially said that, if the jury concluded that the snow and ice were not the result of natural accumulation, they should not go on to consider whether it was an open and obvious danger. The fact that the accumulation was unnatural and the landlord failed to meet his duty to remedy the condition was all the plaintiff needed to prove. (The Appeals Court indicated that it might reach a different conclusion in cases where the snow and ice did not lie in a well-traveled path).
The Soderberg case can be regarded as a helpful one for plaintiff’s-side personal injury lawyers in Massachusetts.
The other Massachusetts personal injury case of note this week was Lev v. Beverly Enterprises-Massachusetts, Inc. The Supreme Judicial Court heard oral arguments in the case this week.

END_OF_DOCUMENT_TOKEN_TO_BE_REPLACED

The abuse and neglect detailed by the Herald story is shocking. Nursing home residents not receiving CPR when unresponsive. Nursing home residents who are the victims of physical, sexual and verbal abuse by staff. Nursing home residents slipping and falling in puddles of their own urine. Untreated bed sores, pneumonia and urinary tract infections.
If you have a family member in a nursing home, there are some great resources out there to help you investigate the quality of care at the nursing home where your family member is cared for. The Herald story mentions the mass.gov wesbite, but you can also use the Department of Health and Human Services’ OSCAR database. Or contact the Massachusetts Advocates For Nursing Home Reform.

END_OF_DOCUMENT_TOKEN_TO_BE_REPLACED

OK, so unless you’ve been living under a rock, you’ve heard countless stories about the massive global Toyota recall for problems with sudden uncontrolled acceleration. Millions of cars have been recalled in the US and Europe.
Now guess how many Toyota cars have been recalled in the company’s home country of Japan. Just try and guess.
If you guessed zero, it’s too bad there’s no prize for the right answer. Because you’d be spot on.
Why haven’t any Toyotas been recalled in Japan? Is it because Japanese Toyotas are somehow immune to the accelerator problems that have led to horrific car crashes elsewhere?
Nope, it’s because Japanese consumer protection and products liability laws are astoundingly weak. (The country only has one full-time auto recall investigator, who is augmented by about a dozen temp workers).
In the 1970s, Fumio Matsudo, sometimes referred to as the “Ralph Nader of Japan,” tried to blow the whistle on some unsafe Nissans. He was rewarded for his actions with his arrest and criminal blackmail charges.
Maybe the tort reform crowd from think tanks like the Manhattan Institute can move to Japan. It sounds sort of like their version of utopia. The rest of us can be glad that we live in Massachusetts, in the good old United States, where our legal system at least makes some effort to protect us from unsafe products.

END_OF_DOCUMENT_TOKEN_TO_BE_REPLACED

The passage yesterday in the Senate of a bill banning text messaging while driving and imposing visual and other medical tests on drivers over 75 years old is good news inasmuch as it presages a ban on hand-held texts, but the potential ban on hands-free devices and the medical review of seniors raise a lot of questions.
There really is no research data showing that hands-free wireless devices are anymore distracting than your car radio or carrying on a conversation with a passenger in your car.
The idea of having seniors’ doctors pull their license also makes me uncomfortable. A doctor’s duty is primarily to his or her patient, just as a lawyer’s duty is to his or her client. I wouldn’t like the idea of having to rat my clients’ driving out to the RMV (such a law would represent an unprecedented abrogation of attorney-client privilege) and I don’t think doctors should have to do it either. If the evaluating doctor is the driver’s personal physician, it really represents an intrusion into the doctor-patient relationship.
It appears that there are a lot of details to be ironed out about the medical evaluations of senior drivers. What happens if one doctor declares a patient unfit to drive and the driver gets a second opinion pronouncing him capable of driving? Why is the first doctor’s opinion sacrosanct and inviolable? If this is going to work at all, there need to be objective criteria that are employed, rather than doctors’ loosey-goosey opinions. Otherwise, there may be Due Process issues with the proposed law.
If Massachusetts passes the Senate version of the bill, we will be going further, perhaps, than any other state in regulating driving by seniors. According to this chart by the Insurance Institute of Highway Safety, the only jurisdictions that require anything more of seniors than eye tests or special renewal procedures are New Hampshire and Washington, D.C. and the Massachusetts bill would seem to be going even further than those jurisdictions.
This is something all drivers in Massachusetts will be keeping an eye on.

END_OF_DOCUMENT_TOKEN_TO_BE_REPLACED

Umm, is it 1906 again? Do we need another Pure Food and Drug Act?
Last month, Consumer Reports ran an article entitled Bagged Salad: How Clean?, revealing that some bagged salads contain disturbingly high levels of bacteria and highlighting that there are no FDA regulations about acceptable bacterial levels in leafy greens.
Now the FDA has opened a special docket, where you can register your vote supporting food standards for leafy greens and urging “zero tolerance” for bacteria like E. Coli O157:H7, salmonella and listeria, a standard that already exists for other food products.